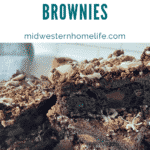 These triple chocolate brownies are everything a brownie should be -- gooey, fudgy, and impossible to stop at one. Choose your level of decadence: without frosting, frosted, or embellished with EVEN MORE chocolate.

We get commissions for purchases made through links in this post.

Having a go-to brownie recipe in your arsenal is always a good idea. So having a triple chocolate brownie recipe means you are armed and ready for any fudgy brownie craving that may come your way.

This is a classic brownie recipe, adapted from a recipe on the back of a box of Nestle cocoa powder. The frosting recipe, is too. Since the only thing a chocolate brownie topped with decadent dark chocolate frosting needs is more chocolate (and a glass of cold milk), I converted these into triple chocolate brownies by adding a crunchy layer of chopped milk chocolate and a drizzle of white chocolate. Because, why not.

I use dark cocoa powder for its deep, dark, rich flavor. I also add espresso powder to intensify the chocolate flavor even more, and cinnamon because I’m obsessed with the flavor combo.

You're going to LOVE these

Cocoa powder. I prefer dark chocolate powder because it gives a richer, more intense chocolate flavor. Something I have been searching for my whole life. But regular cocoa powder will be great, too.

Cinnamon. I love the flavor combination of cinnamon and chocolate, so I add it all the time. This ingredient is totally optional.

Nuts. I didn’t include nuts in this recipe because I don’t like nuts in brownies. But I do like crunch, which is why I add the chocolate chips. Go ahead and do one or both! Walnuts are a classic, but any nut would be great in these.

If you're watching your intake of certain ingredients, you can make some or all of these substitutions. If you do all, you may end up with a cakier result, but it will still be chocolatey and fudgy and totally satisfy your chocolate cravings. Definitely lean toward underbaking to keep them nice and gooey.

To ensure fudgy centers in your brownies, check doneness a few minutes before the earliest recommended baking time. Your toothpick should come out with moist crumbs on it. If your toothpick has wet batter on it, give it a couple more minutes and check it again.

Sifting flour and cocoa powder are a sure-fire way to avoid lumps in your batter. But really, if I’m sifting one or two dry ingredients, I sift them all. Because I don’t want lumps of baking powder either.

How to Make Triple Chocolate Brownies

Start by mixing the sugar, butter, and water together in a large bowl. Add eggs and vanilla. You don’t have to use your mom’s vintage Pyrex bowl from 1967, but brownie points (terrible pun intended) if you do.

Stir the flour mixture into the sugar mixture until thoroughly combined. Add the dark chocolate chips.

Spread into pan. Bake for 18-25 minutes. Check for doneness at around the 16-minute mark. For the fudgiest brownies, underbake them a tad.

Frost the brownies. I don't have an offset spatula because my little appetizer/butter knife works just perfectly!

As long as you're going for it, you might as well go all the way and add a 4th kind of chocolate!

Dark Chocolate Frosting for the Brownies

For the EXTRA Chocolate Topping

This little gadget is just the right size for cutting and serving the first brownie out of the pan without smooshing everything around it.

If you're eyeing up my groovy mixing bowl, this is it. Mine was my mom's and she got it in the 60s. Can you tell? Growing up, it held the potato salad at all our birthday parties. Now I use it mostly for mixing up batters. It has a spout on each end, which is super handy for pouring with precision.

« That Plant Is Not My Grandpa
Cucumber Tzatziki Salad »