Published: Jan 19, 2023 by Cara Lanz · As an Amazon Associate I earn from qualifying purchases. 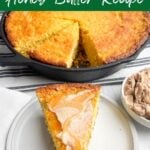 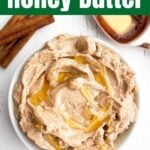 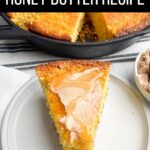 Texas Roadhouse Cinnamon Honey Butter is sweet butter with a touch of honey and cinnamon -- delicious on everything from banana bread to baked sweet potatoes. Easy copycat version you can make in 5 minutes in the comfort of your own kitchen.

And the best part is you don't even have to leave the house to get it.

You can make this super easy Texas Roadhouse cinnamon butter recipe in just a few minutes with simple ingredients you probably already have.

And while you're at it, you might as well make a double batch. Because you're going to be spreading it on everything.

Why You'll Love This Recipe

Easy recipe you can make in minutes

Refer to the recipe card at the bottom of the post for measurements.

Butter. One stick of room temperature butter. I use unsalted butter because it's what I always have on hand, but you can use salted butter and skip the salt.

Cinnamon. Ground cinnamon adds warm flavor to this cinnamon honey butter. You can adjust the amount of cinnamon up or down to your liking.

Mix for several minutes on high until the ingredients are completely combined and the butter is a light and fluffy consistency.

Spread your homemade honey butter with wild abandonment on all your favorite things.

Store cinnamon honey butter in an airtight container in the refrigerator.

Freeze honey butter wrapped in a double layer of plastic wrap. Thaw in the refrigerator.

What do you eat with honey butter?

What is cinnamon butter made of?

What is the best way to mix cinnamon honey butter?

A stand mixer or electric hand mixer. You can mix honey butter together by hand, but it's so much easier and faster with a mixer. And the high speed of the mixer aerates the butter and makes it light and fluffy.

Get the Stuff I Use

This KitchenAid electric mixer is perfect for whipping up this cinnamon honey butter. I use the whisk attachment for whipping cream for Cinnamon Whipped Cream and egg whites for Cranberry Almond Macaroons.

These Snapware Pyrex glass storage containers stack neatly in my pantry and fridge. The small round one is the perfect size for a batch of honey butter. 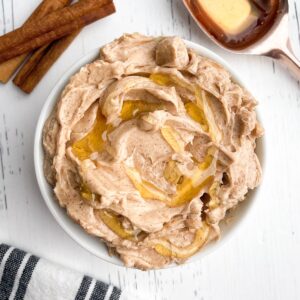 Cara Lanz
Texas Roadhouse Cinnamon Honey Butter is sweet butter with a touch of honey and cinnamon, and it's delicious on everything from banana bread to baked sweet potatoes. Easy copycat version you can make in the comfort of your own kitchen.
5 from 1 vote
Print Recipe Pin Recipe
Prep Time 5 mins
Total Time 5 mins
Course Side Dish
Cuisine American
Servings 8
Calories 125 kcal

Soften butter at room temperature for 1-2 hours. Feel free to adjust the cinnamon and honey up or down to your liking. Whip the butter on high speed until it is light and fluffy.