Published: Dec 23, 2022 by Cara Lanz · As an Amazon Associate I earn from qualifying purchases. 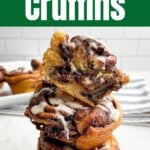 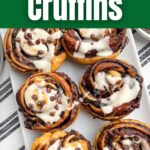 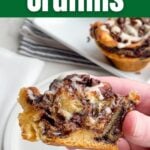 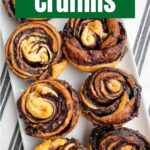 Chocolate Cinnamon Cruffins are soft, flaky pastries made with crescent rolls, cinnamon brown sugar, and chocolate chips rolled up like a muffin.

This super easy cruffin recipe is just as delicious plain as it is glopped with soft cinnamon roll frosting.

Cruffin -- a funny name for a seriously delicious pastry. The word comes from a mix of croissant and muffin because it's made by rolling up flaky pastry dough into the shape of a muffin.

But I'm adding another breakfast pastry to the mix: cinnamon roll.

This delicious cruffin recipe is perfect just the way it is or with a smear of cinnamon roll frosting.

The best part about these croissant muffins? It's a really easy recipe.

You don't have to worry about working with yeast, making homemade dough, proofing, laminating -- none of the fuss that comes with making traditional croissant dough or cinnamon rolls.

So go ahead and whip them up anytime you're craving a sweet treat with your cup of coffee.

What to Serve with Cruffins

Why You'll Love This Recipe

Easy cinnamon cruffin recipe you can make with simple ingredients

Impressive looking pastry for a special occasion brunch or breakfast

Pillsbury crescent dough. This easy cruffin dough is made from cans of crescent rolls. You can use the kind with perforations and pinch them together or the crescent dough sheets.

Butter. Use room temperature butter that is soft enough to spread.

Cocoa powder. I use dark chocolate powder because I love the intensely rich chocolate flavor, but you can also use regular cocoa powder.

Brown sugar. I like brown sugar for the rich flavor. Dark or light brown sugar will both work equally well. You can also use white sugar.

Powdered sugar. Confectioner's sugar, or icing sugar, is the base of the cinnamon roll frosting.

Milk. Add the milk to the frosting a little at a time until it reaches your desired consistency. You can also use cream.

1. Prep the oven and muffin tin.

Preheat the oven to 350. Spray a muffin pan with nonstick cooking spray.

⭐Pro Tip: Crescent dough is easiest to work with when it's cold. Keep it in the refrigerator until you are ready to start rolling it out.

In a small bowl, stir the softened butter and cocoa powder together.

In a separate mixing bowl, stir the brown sugar, cinnamon, and mini chocolate chips together.

Roll out the crescent dough onto a silicone baking mat, silicone cutting board, or a lightly floured work surface.

If using crescent roll dough with perforations, pinch the seams to seal. It's okay if they're not perfectly sealed.

5. Spread the butter onto the dough.

Use a butter knife to evenly spread about 2 ½ tablespoons of the cocoa powder butter mixture onto each sheet of dough. You can spread it all the way to the edges of the dough.

Sprinkle ⅓ of the brown sugar chocolate chip mixture (about ½ cup loosely packed) evenly on top of the butter. Gently press it into the dough.

Tightly roll up the sheet of dough from the long end.

Use a sharp knife to cut the log in half cross-wise so you have 2 logs.

Roll each portion of dough with the cut sides facing up into the shape of a cinnamon roll.

Place the rolled up cruffins into the prepared muffin tin.

Bake for 18-20 minutes or until the tops of the cruffins are deep golden brown.

Let the cruffins cool for a few minutes in the pan before removing them.

In a small bowl, stir the powdered sugar, melted butter, vanilla, and 1-2 tablespoons of milk. Add more milk a little at a time until it reaches the right consistency. I use 3 tablespoons.

Spoon the soft frosting over the warm cruffins. Sprinkle with a few more mini chocolate chips, if desired.

Store leftover baked cruffins in an airtight container for a few days. Reheat in the microwave.

Freeze unfrosted cruffins in a freezer bag or freezer-safe container for a month.

The easiest way to work with the crescent roll dough is to keep it cold until you're ready to use it.

Use a sharp knife when cutting the crescent roll dough.

How thick or thin you make the cinnamon roll frosting is a personal preference. Start with a small amount of milk and add more until it's how you like it.

What is a cruffin?

A  cruffin is a combination of a croissant and muffin.

Can you heat up a cruffin?

Yes! Cruffins are best enjoyed fresh. But if you happen to have some leftover, you can heat them up in the microwave the next morning to enjoy with your coffee.

Can I freeze cruffins?

You sure can. Place them in a freezer safe container and freeze them for up to a month. They are best frozen unfrosted.

Get the Stuff I Use

This Henckels cutting board is nice and big with non slip feet.

I've had this set of Anchor Hocking mixing bowls for over 20 years and I still use them all the time. 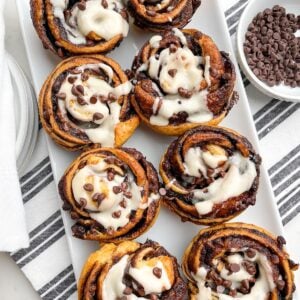