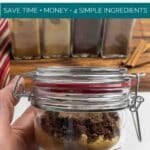 Pumpkin Pie Spice is super easy to make with four spices you might already have in your kitchen: cinnamon, ginger, cloves, and nutmeg.

You’re going to love this

Fall baking essential. Pumpkin spice is a key ingredient in all the warm and cozy fall baking recipes we turn to as soon as the first bit of chill hits the air. Now you can keep refilling your pumpkin pie spice jar all season long when you make your favorite pumpkin pie, muffin, and bar recipes.

Perfect for gift giving. Know someone who loves pumpkin spice as much as you do? Give a jar of your homemade spice blend with a loaf of your favorite pumpkin bread.

Easy and convenient. The first time I made my own pumpkin pie spice was when I realized, mid-recipe, that my jar was empty. Rather than hitting pause on what I was doing and running to the store, I realized I had everything I needed to just refill the jar and carry on.

Less expensive. You can save by making your own spice blend with ingredients you're already using and by making only what you’ll use, so there’s less waste.

Better flavor. Spices lose flavor and aroma over time. And what fun is baking pumpkin muffins if it isn’t going to make your home smell like heaven? When you mix a fresh batch of pumpkin pie spice each year, you’ll get the most intense flavor possible.

What is in pumpkin pie spice?

This spice blend is just a mixture of 4 simple spices:

Some blends may also include allspice, cardamom, mace, black pepper, white pepper, or cayenne pepper. Add one or two of them, if you like!

How to DIY your pumpkin pie spice

Stir or shake until completely combined.

To maximize the flavor, store your pumpkin pie spice mixture in an airtight container in a cool, dry place. 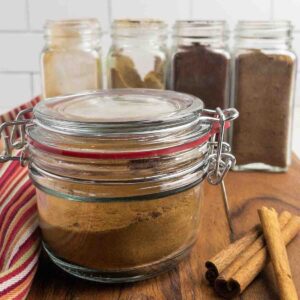 How to Make Pumpkin Pie Spice

Let’s imagine the worst case scenario: you have neither pumpkin pie spice, nor all of the ingredients to make your own (shudder). Luckily, you have a few options.

Cinnamon
Use all cinnamon, since cinnamon is the main ingredient in pumpkin pie spice, anyway.

Cinnamon and...
Amp up your cinnamon with a dash of one or two of the other spices like cloves, nutmeg, or ginger.

Is allspice the same thing as pumpkin pie spice

Allspice is a deceiving name, isn’t it? Because it sounds like it contains all the spices! Plus, it smells like a blend of spices. Allspice is actually the name of a single kind of spice, like cinnamon. If it’s all you have, you can use about ½ the quantity of allspice as a substitute for pumpkin pie spice.