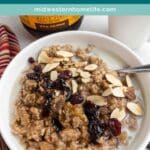 Crock Pot Apple Cinnamon Oatmeal is as warm and cozy as apple pie — and an easy way to make a big batch of healthy breakfasts for the week. Just combine steel cut oats, fresh apples, cinnamon, water, almond milk, vanilla, and maple syrup, then kick back and let your slow cooker do the work.

You’re going to love this

Warm and cozy. A comforting bowl of apple oatmeal with the cozy flavors of cinnamon and maple syrup will warm your belly and your soul on a chilly morning.

Healthy oatmeal. This oatmeal recipe is dairy-free, gluten-free, and has no processed sugar. All you’ll find are wholesome ingredients you can feel good about feeding your family.

Steel-cut oats. The coarse cut of steel-cut oats are hearty and provide more texture and substance than rolled oats. Plus, they can stand up to the longer cooking time in a slow cooker.

Tastes like apple pie. Apples and cinnamon are the quintessential flavor combination we crave in the fall and cooler months. This recipe contains two cups of apples, two tablespoons of cinnamon, and two tablespoons of maple syrup to pack as much flavor as possible into the oatmeal.

Easy. Other than peeling and chopping apples, there’s really no prep involved. Just dump everything in, stir it together, turn on your crock pot, and walk away. Or go to bed.

Meal prep recipe. This recipe uses a really simple formula, so you can make bigger batches and a week’s worth of breakfasts ahead of time. Or scale it down, if you like.

Water and almond milk. For the cooking liquid, I used half water and half almond milk to provide some flavor and a little creaminess to the oatmeal, without relying on dairy. You can use cow’s milk or a combination of milk or cream in place of any or all of the almond milk and water. Note that if you cook your oatmeal in all milk, you may end up with a thicker result.

Apples. I chose Fuji apples because they hold their shape nicely when cooked. But you can also use Granny Smith, Winesap, Honeycrisp, or Pink Lady.

Cinnamon. Cinnamon is the only spice I used in this apple oatmeal, but you can use apple pie spice, pumpkin pie spice, or replace a portion of the cinnamon with your favorite warm spices like ginger, nutmeg, cloves, allspice, mace, cardamom, or even a little black pepper or cayenne!

Maple syrup. There isn’t much sweetener in this apple oatmeal for a couple of reasons. First and foremost, I don’t like taking healthy, wholesome ingredients and then adding a bunch of sugar to them. Second, I want to reserve the right to add some sweet stuff to the oatmeal later through the toppings — and not overpower it by putting sweet on sweet. Because some mornings just require chocolate chips on oatmeal.

When I make slow cooker apple cinnamon oatmeal, I use a ratio of 1 cup oatmeal to 4 cups liquid. This is what the whole formula looks like:

Per cup of steel-cut oats, I add:

Using this ratio will result in apple oatmeal that is very creamy right out of the crock pot. So, if you like a thicker oatmeal, use less liquid, about 3 ½ cups per cup of oats. Less liquid may also reduce cooking time.

As the oatmeal cools, it will become even thicker. So if you are prepping for the week ahead or freezing some of the cooked oatmeal, you may wish to add some water or almond milk to the oatmeal when you reheat it to get the consistency you like.

I typically double or triple this recipe so I have breakfasts prepped for the week or some extra to throw in the freezer. The recipe and instructions below are for a double-batch.

If your oatmeal looks too creamy right away, let it cool a bit -- it will thicken.

Serve your apple cinnamon oatmeal with your favorite toppings.

Store your oatmeal in the refrigerator for up to 3 days. To reheat oatmeal, add a little milk or water and reheat it in the microwave or on the stovetop until it is fully warmed through.

The BEST Toppings for oatmeal 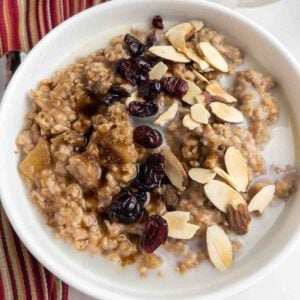 Yes! Freezing cooked oatmeal is a great way to have a healthy, hearty breakfast on hand at all times. Just portion your cooked oatmeal into freezer-safe containers and store them in your freezer for up to six months.  Then thaw it in the refrigerator or microwave and reheat it in the microwave or stovetop with a little milk or water.

What is the ratio of oatmeal to liquid in slow cooker oatmeal?

I use a ratio of 3 ½ to 4 cups of liquid to 1 cup of steel-cut oats. 3 ½ cups creates a thicker oatmeal, while 4 cups makes it very creamy. So you can adjust the liquid, depending on how you like your oatmeal.

What is the best kind of oatmeal to use in the slow cooker?

Steel-cut oats are hearty enough to stand up to the long cooking time in a slow cooker. Old fashioned oats or instant (quick) oats are not recommended because they will turn to mush.

What kind of liquid should I cook oatmeal in?

I like to use a 50/50 split of almond milk and water. Too much water is just too bland, and all milk could create a gluey consistency.

This is a pretty no-frills slow cooker with the basic High, Low, and Warm temperature settings. I like the locks on the lid so when I bring it to a potluck or holiday meal, I don't have to worry about spills.

See it at Amazon

I like to buy this in large quantities so it's more affordable. The small bags are shockingly expensive -- I think. So this is what we get.

See it at Amazon